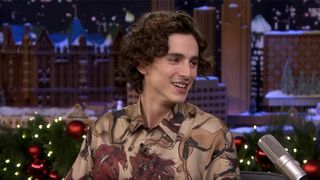 While sitting down with Jimmy Fallon last night, Timothée Chalamet discussed his childhood and showed off his juggling skills, but it was his recollection of an “epic” and “surreal” dinner with Kid Cudi, Kim Kardashian, and Kanye West that really caught our attention. Watch above.

Chalamet revealed that he was invited to Cudi’s birthday dinner in January, something he was already freaking out over. “He’s one of my favorite artists,” he enthused, “I wouldn’t be acting without him. I wouldn’t have pursued this crazy career.”

Much to his surprise, however, Pete Davidson, Kanye West, and Kim Kardashian were also on the guest list. “I did not know that was what I would be walking into, which was awesome, but was surreal.”

He then told of how that surreal situation lead him to panic-texting friends in the bathroom, before getting a grip off himself and sitting back down. “Man, 16-year-old you would slap the shit out of you. You go back to the table.” Adding, “and then you drink whatever is on the table and forget about all of it anyway.”